No items found.
Product is not available in this quantity.
Blackmagic Design

ATEM SDI Extreme ISO
This product is out of stock.
Product is not available in this quantity. 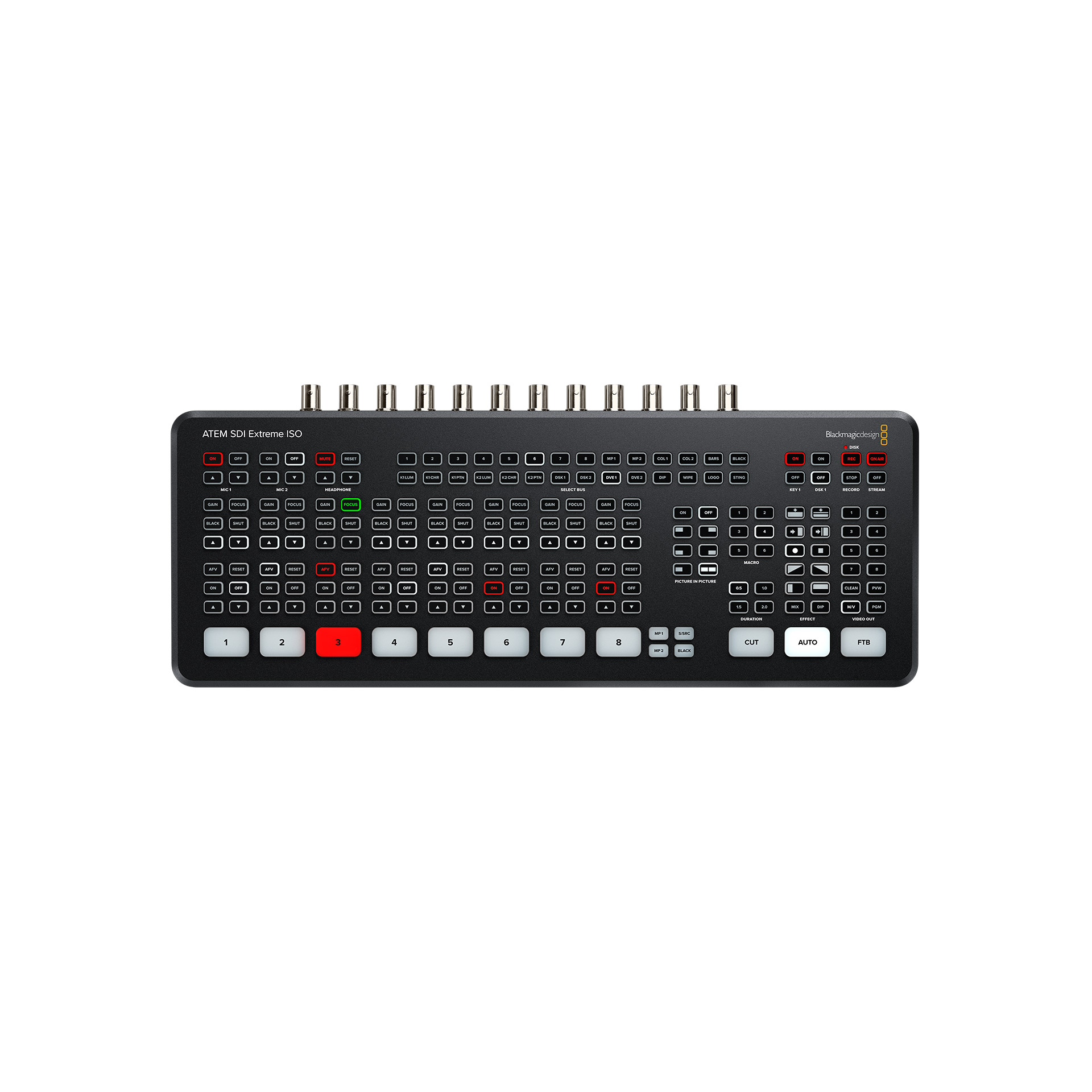 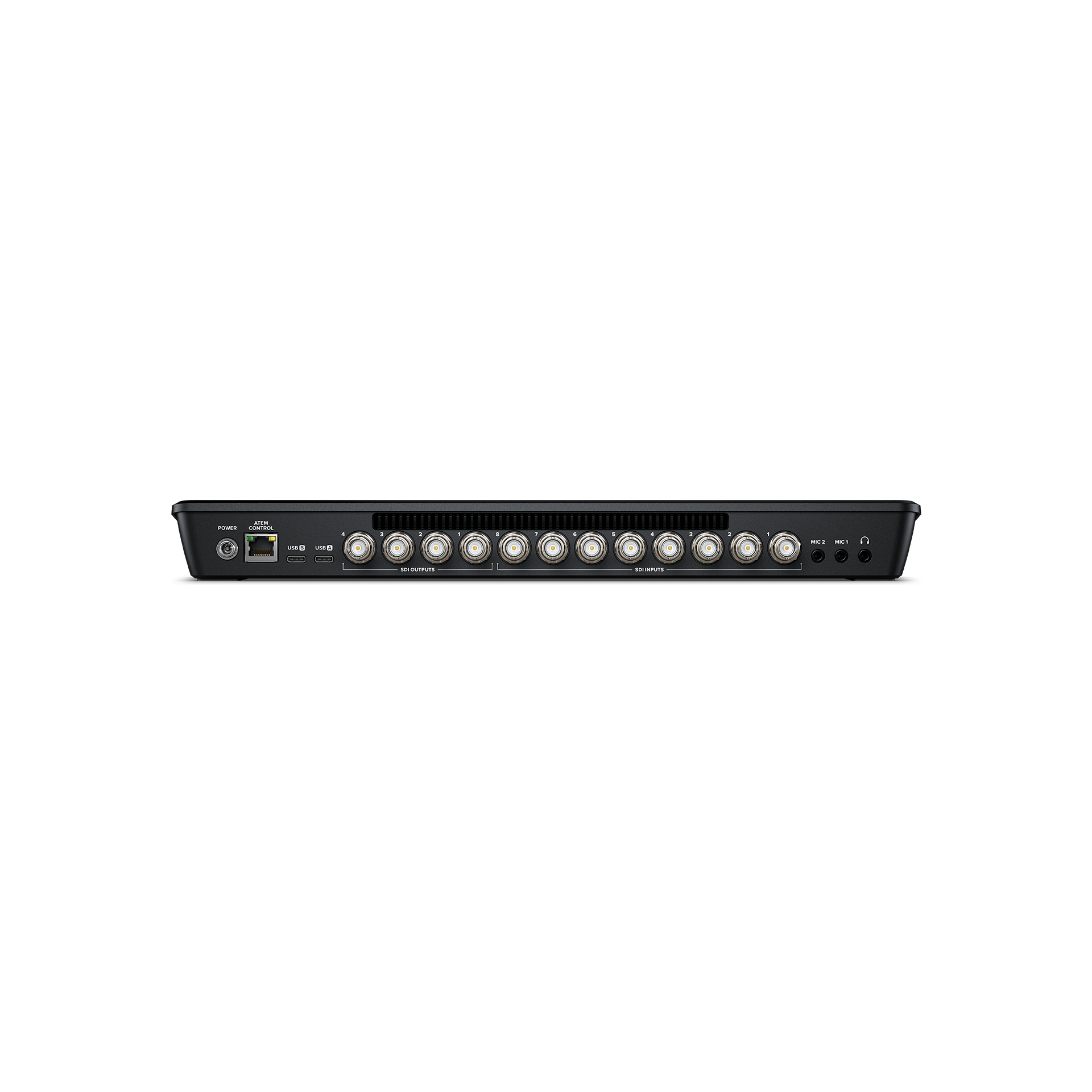 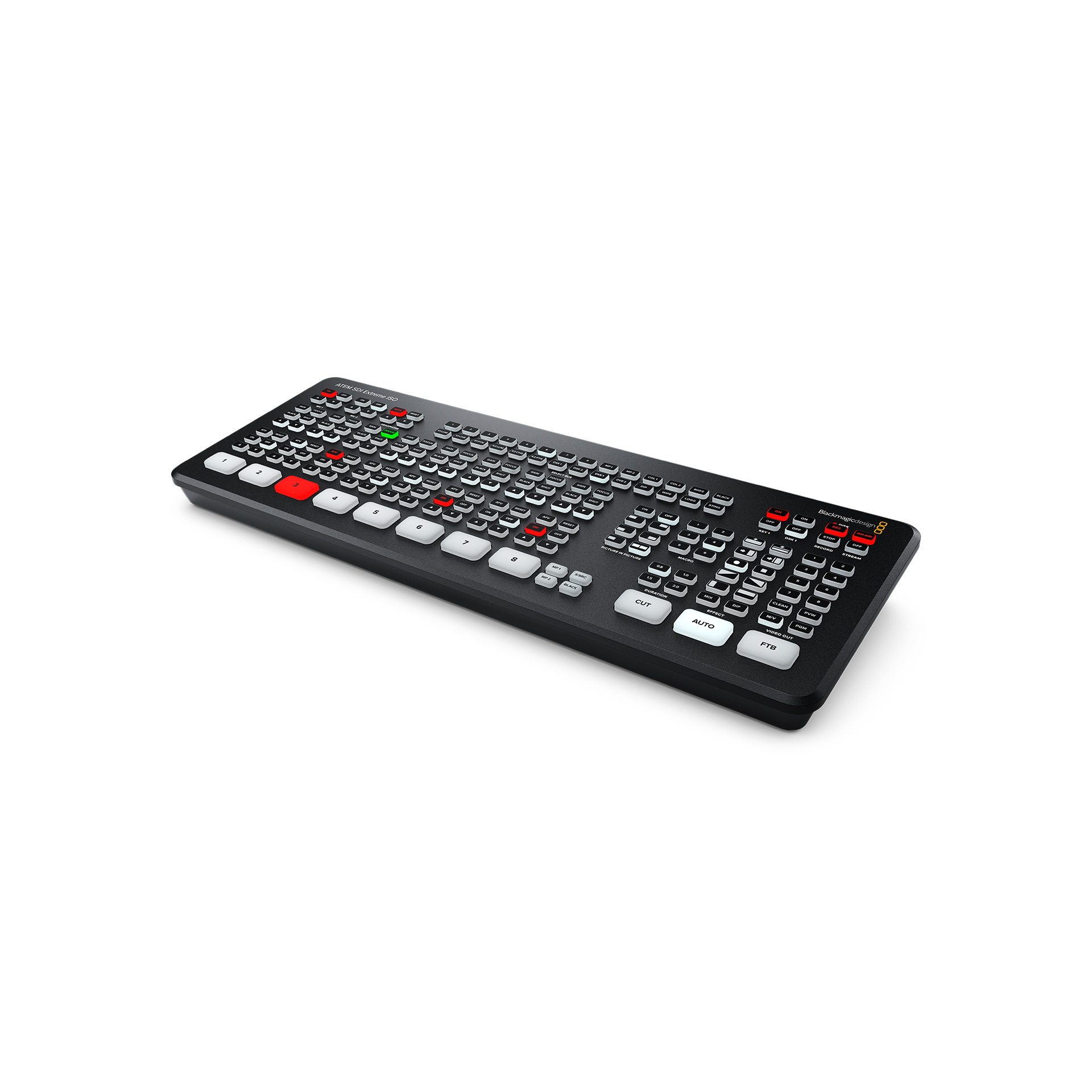 This model includes all the features of ATEM SDI Pro ISO model but has 8 SDI inputs and 4 SDI outputs. It can record 9 separate H.264 video streams in real time, allowing capture of all 8 clean feed inputs as well as the program video. A DaVinci Resolve project file is also saved.

Not sure if this is the right piece of equipment for you?

Blackmagic Design
A$2,125
This product is out of stock.
Quantity not available
Overview
Features
Tech Specs
Delivery

Switch, add effects, color grade, and key in real time using the control surface's buttons, or via the software control panel. CCU functions are available for controlling Blackmagic Studio and URSA Mini/Broadcast/Micro Studio cameras from the switcher. The ATEM Mini Extreme ISO supports up to nine layers, with four upstream and two downstream keyers, up to four chroma keyers, up to four linear keyers, two DVE with borders and drop shadow, five pattern generators, and two color generators. Designed for live streaming or webcam, the Mini Extreme ISO has four 3G-SDI outputs to feed monitors and supports up to 16-screen multiview.

The front panel includes easy-to-use buttons for selecting sources, video effects, and transitions. The source buttons are large, allowing you to operate them by feel. Included on the ATEM Extreme ISO are buttons for audio mixing, recording, and streaming control, as well as output selection buttons that let you change the video output between cameras, program, and multiview. On the rear panel, there are 3G-SDIconnections for cameras or computers, extra microphone inputs, USB for webcam out, plus 4 x 3G-SDI "AUX" outputs for program video.

You can output using the Ethernet connection to your network or use the USB Type-C output to have your switched show recognized as a webcam input by virtually any video software such as Zoom, Microsoft Teams, Skype, Open Broadcaster, XSplit Broadcaster, and others.

If you're doing live production on location, the ATEM Mini Extreme models support connecting an Apple or Android phone to the USB port to use mobile data. It's also a great backup for the main Ethernet connection, so you don't drop your stream if your hardwired connection gets interrupted. The switcher will automatically switch to using the phone as the primary connection, and the USB port will also power your phone, so the battery won't drain.

You can configure the 3G-SDI outputs for multiview with 4, 7, 10, 13, up to 16 views including Program, Preview, eight 3G-SDI inputs, SuperSource, clean feed, media player, streaming status, recording status, and audio meters.

The switcher can store up to 20 images with fill and key, and it supports PNG, TGA, BMP, GIF, JPEG, and TIFF file formats.

The ATEM Mini Extreme models support the direct recording of your streaming data to USB flash disks using the same H.264 video files with AAC audio that you streamed. The Mini Extreme ISO also allows you to record the eight input video channels as MP4 files. This allows you to directly upload to any online video site, such as YouTube or Vimeo. Recording to multiple disks is also supported via a USB hub or the Blackmagic MultiDock, so when a disk becomes full, recording can continue to a second disk for nonstop recording. Record settings and disk selection are set up in ATEM Software Control, and there's a record status view in the built-in multiview. You can even trigger recording on connected Blackmagic Pocket Cinema Cameras.

The Mini Extreme ISO saves a DaVinci Resolve project file, so with a single click, you can open your live production as a video edit. All cuts, dissolves, and media pool graphics will be loaded, allowing you to tweak and edit your live production using the recorded input footage. If you recorded the camera originals as Blackmagic Raw camera files, you can relink those and take advantage of DaVinci Resolve's color correction abilities.

One of the benefits of ATEM Mini is the professional production values possible using the range of built-in video effects. The cut button ensures an instant cut when switching between sources. The auto button is a professional term used on large broadcast switchers to enable video effect transitions. There are duration buttons for video effects allowing 0.5-, 1-, 1.5-, and 2-second settings. You can also select the type of effect you want including mix, which does a smooth transition between sources, and dip, which fades via a color during the transition. Or use fun DVE effects that move the image off-screen when transitioning between sources.

With two independent 3.5mm stereo audio inputs, you can connect desktop and lapel microphones, or you can connect a music player to generate introduction music after the live stream commences but before the program starts. With two extra stereo audio inputs, you can ensure a host and guest both have lapel microphones when doing interviews. All audio inputs to the ATEM Mini include buttons on the panel for adjusting audio level and enabling inputs into the audio mixer. All models feature a Fairlight audio mixer with all SDI inputs, and both microphone inputs are all connected to the audio mixer, so you can live mix from all audio sources. The ATEM Mini Extreme also adds a headphone output.

Hiding in the ATEM Mini Extreme models are a host of broadcast-caliber features that are accessible when connected to a Mac or Windows computer running the free ATEM Software Control app.

Assurance with every online order:

We deliver to most areas within mainland Australia. If your postcode or address does not provide shipping estimates, please contact our Customer Service Team to discuss delivery options.

We do not offer international shipping. Sorry.

We does not deliver to parcel lockers due to their lack of security. Please supply an address which has someone there to receive goods. Package will be left at address if unattended. You will be asked to supply an alternative address from one of our customer service team members should you supply a parcel locker location when placing your order.

Goods will be shipped to you according to the delivery method selected at the checkout. In some circumstances this may change if the selected delivery method is not available at the time of despatch.

Australia Post eParcel and Toll offer a door-to-door, street-level delivery service only. They are unable to deliver products above the ground floor or enter a customers' residence. They are also unable to provide an installation or removal service.

Bulky and Oversized Items such as large TVs and Speaker Packs delivered to residential addresses may incur a surcharge. To eliminate these surcharges, please consider shipping to a business address.

1. Our most important task is to ensure your absolute satisfaction. We will always strive to reach that target. However, we acknowledge that mistakes are made occasionally. This paragraph covers that possibility. If you are not wholly satisfied with the Product, please tell us at the earliest opportunity:

(a) exactly what is the fault;

(b) the date, if relevant, when the fault became apparent;

(c) when and how you discovered the fault;

(d) how the fault affected your use of the goods;

2. To do this, it is essential that you follow the instructions below. These provisions apply in the event that you return goods to us because you say they are faulty:

3. You must tell us by email message to hello@tgav.au or by letter to our land address at the top of this agreement, you that you would like to return goods, specifying exactly what goods and when purchased, and giving full details of the defect or other reason for return. We will then issue a returns note. If you send goods to us without a returns note, we may not be able to identify sufficient details to enable us to attend to your complaint.

4. The goods must be returned to us as soon as any defect is discovered.

5. All endeavours must be made to ensure goods be returned:

(a) in original packaging as far as possible in their original condition;

(c) with our delivery slip;

6. The cost of freight return to Tiny Giants AV will be charged to the buyer only under the following circumstances:

(a) if the buyer is returning goods due to change of mind or any other reason not pertaining to the product being faulty;

(b) if no fault is found in testing, when the buyer has claimed the product is faulty.

7. We will notify the buyer of all freight costs before charging the buyer.

8. Please note: We may request a restocking fee of up to 20% to be paid by the customer on return of goods. This is decided on a case-by-case basis and could be requested if the product was returned due to:

(a) Change of Mind

(b) Claimed faulty product, but no fault found when testing

(b) Opened and used goods